You are here: Home / FVJN Mural 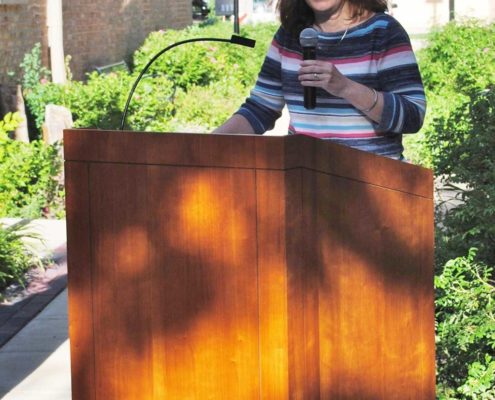 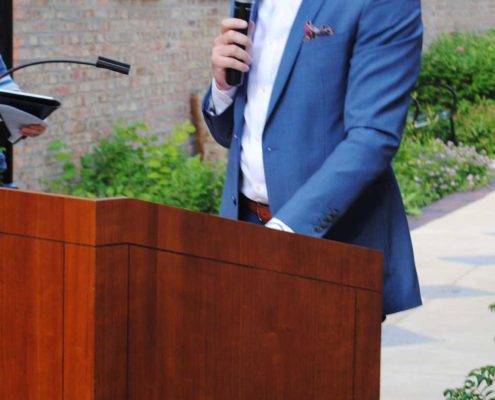 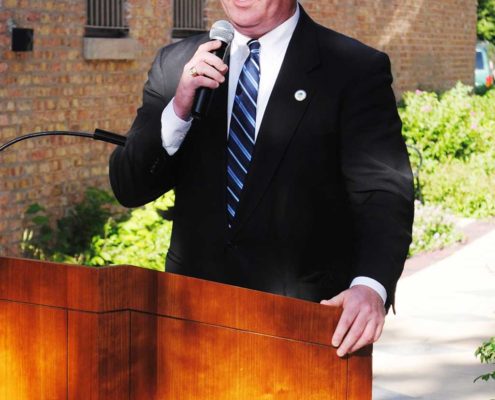 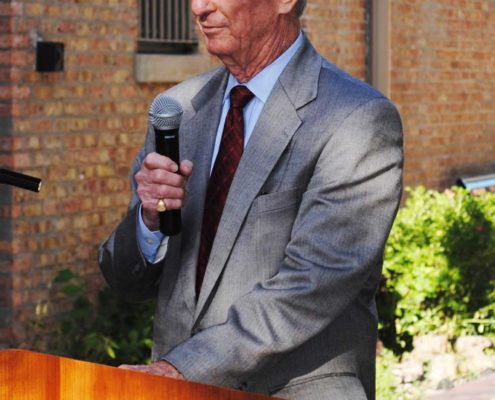 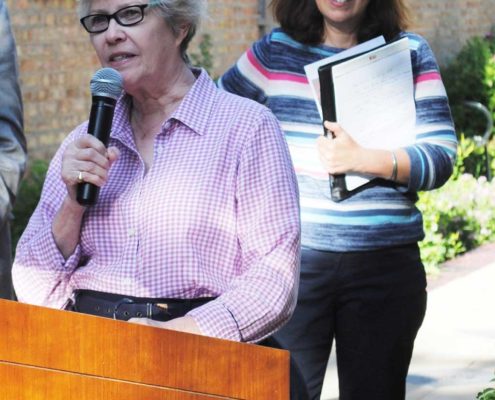 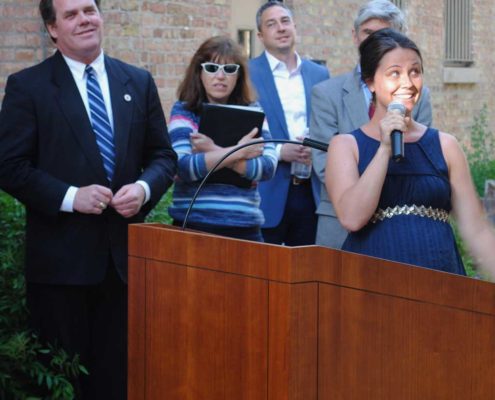 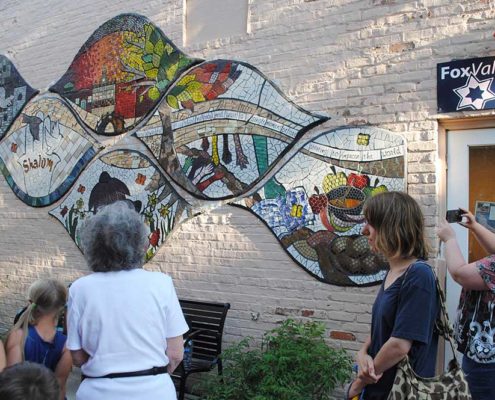 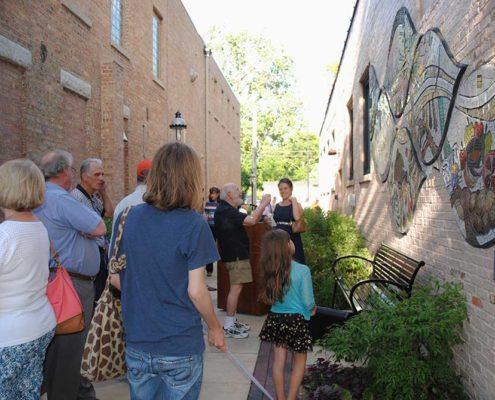 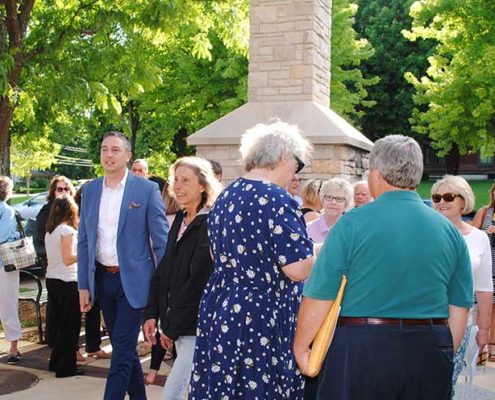 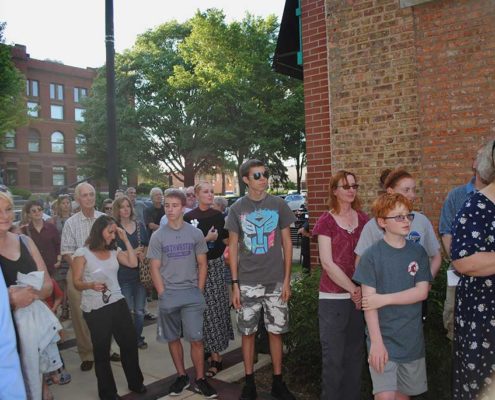 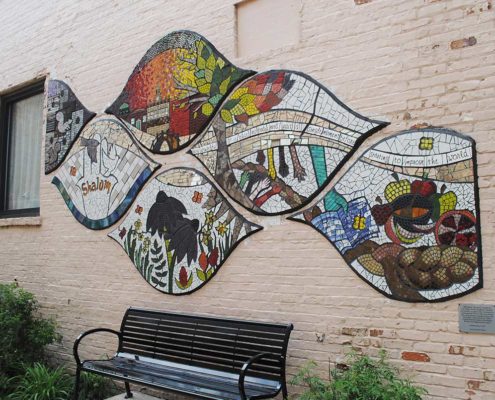 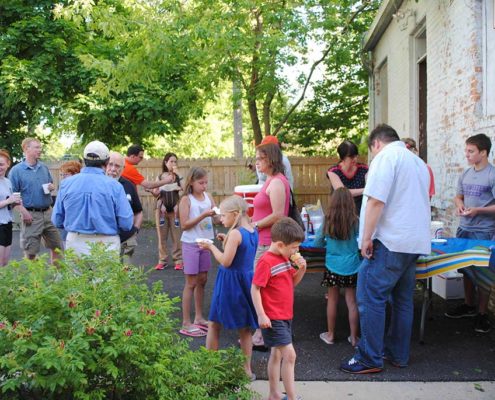 Thank You to Everyone Who Contributed

When deciding how to commemorate their tenth anniversary, Fox Valley Jewish Neighbors chose to do something lasting for the community they call home.

“We have enjoyed being a part of downtown Geneva and have been welcomed by the surrounding community,” said FVJN president Greg Cibura, “when a mural was suggested, we thought it was a great way to do something everyone could enjoy.”

The result is the large, six panel mural now located just off Geneva’s Third Street in the alley across from the courthouse. The mural was dedicated on June 6 in a celebration attended officials from the City and community organizations, FVJN families and friends, and Geneva residents and business owners. The mural was designed by artist Danielle Dobies and based on drawings by children from FVJN’s Sunday School and ideas from FVJN members. FVJN families and friends volunteered countless hours to assemble the mosaic tiles under the artist’s direction. Area businesses and individuals donated some of the materials. Funding to cover other costs was obtained through a grant from the Geneva Foundation for the Arts as well as donations from other FVJN supporters. The mural took over a year to complete.

Once the panels had been completed inside, the mural was professionally installed on the side of the building at 121 S. Third Street. Volunteers then painstakingly grouted all of the tile, first applying the grout and then cleaning off the excess. The process took many hours, but also gave the public an opportunity to witness some of the work and learn the story behind the project.

FVJN draws its families largely from the Tri-Cities area and the group wanted the mural to reflect the values that they share with the surrounding community. The panels include symbols of peace, diversity, education, family and ancestry, the sharing of celebrations, and appreciation of the natural and manmade beauty and resources of the area.

6/6 Join us for the Mural Dedication

The mural is the result of the ideas many of you shared over a year ago, the tiles and other material donated, the work of the children at Fox Valley Jewish School and many FVJN volunteers over the past year, and the financial support of FVJN families and friends and the Geneva Foundation for the Arts.

We hope that all FVJN families will be present along with Geneva City Officials, the Geneva Foundation for the Arts, Geneva Cultural Arts Commission, Geneva Chamber of Commerce, and other members of the community as we unveil this wonderful addition to downtown. Ice cream and lemonade will be served immediately following the dedication.

We are nearing the completion of our mural project! It’s not to late to volunteer on this exciting project before the formal dedication on June 6….

The mural will be professionally mounted near our space as 121 S. Third St. We will then need volunteers to apply the grout after it is on the wall. No special skills are needed, but we are requesting ages 15 and up only for this job, as much of the work will be done on ladders. If you can help on Friday, May 27, any time between 1-5, or Monday, May 30, between 11-4, or have a ladder we can borrow, please email Mim Evans at evansml8@yahoo.com. Please include which hours you are available on which day. Only a limited number of people can work at a time, so we will figure out a schedule as we see when people are available. (Note: all dates subject to change if weather is uncooperative.)

Please plan to attend the formal dedication of the mural on Monday, June 6 at 6:00pm. The mayor of Geneva, city council, chamber of commerce, Geneva Foundation for the Arts and others have been invited. Let’s have a great turnout from FVJN and families as we dedicate this project in honor of our 10th anniversary. Watch for more details on the dedication in a future email, but save the date now.

Thank you to all who have volunteered, contributed materials or made a cash donation. We still need to raise additional money to cover installation costs.Please donate here. Any amount is much appreciated.

Please click here to view the presentation about our Mural Process.

We look forward to seeing everyone June 6th! Shalom! 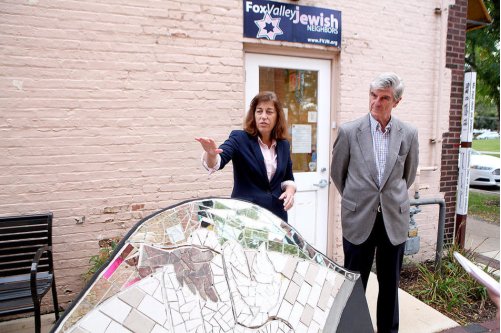 Members of the FVJN and the Geneva Foundation for the Arts attended the unveiling of the first part Thursday in the walkway at 121 S. Third St. Read the full story here. 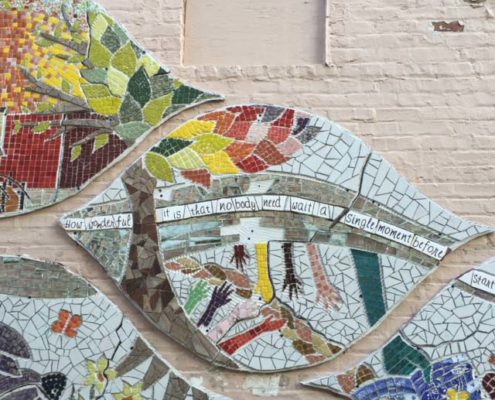 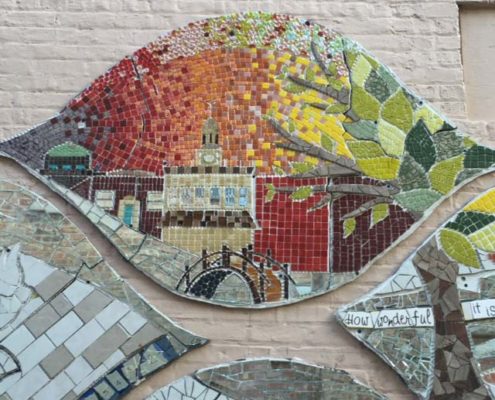 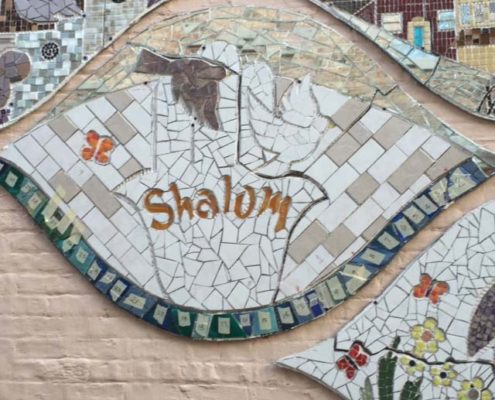 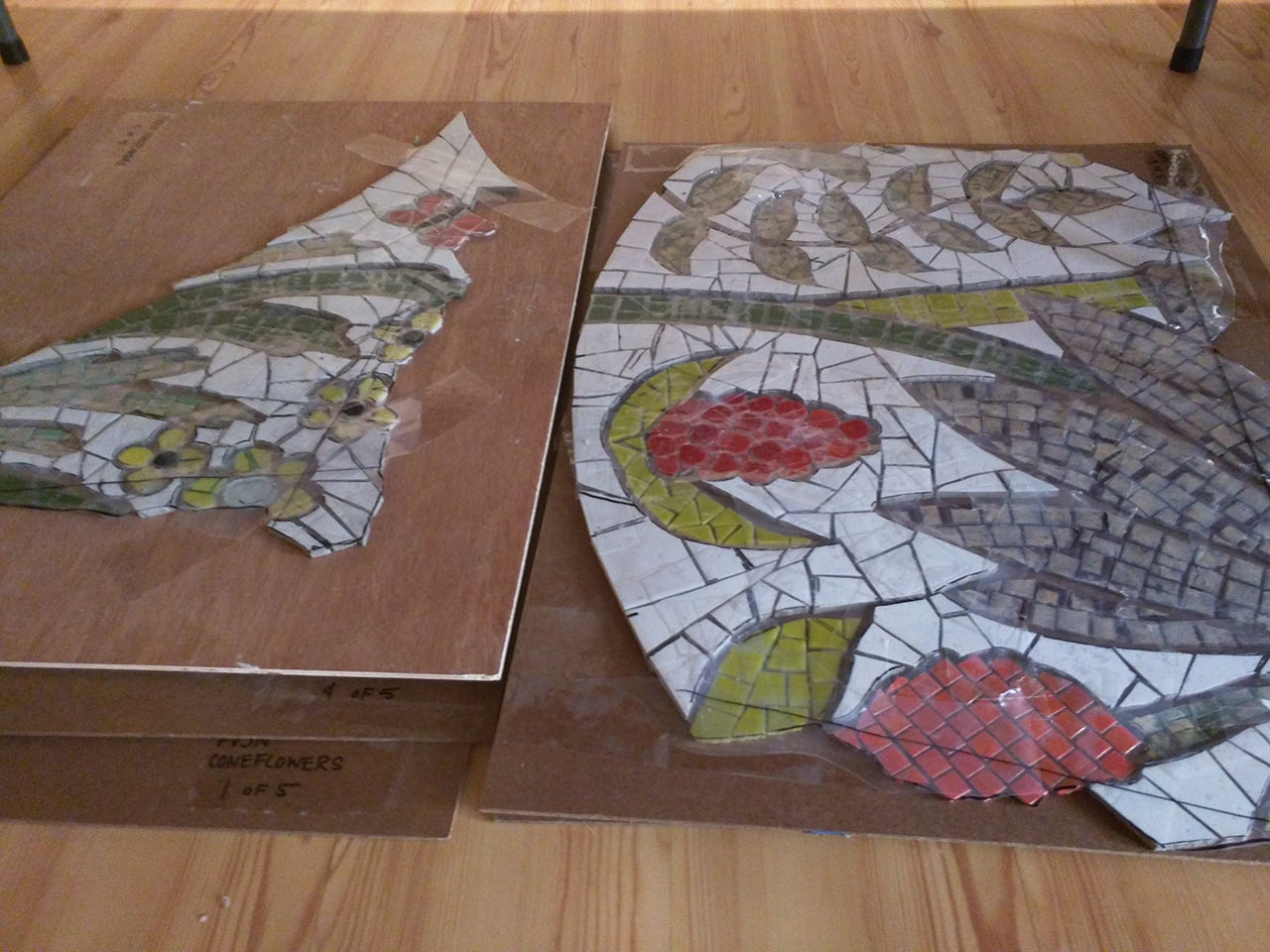 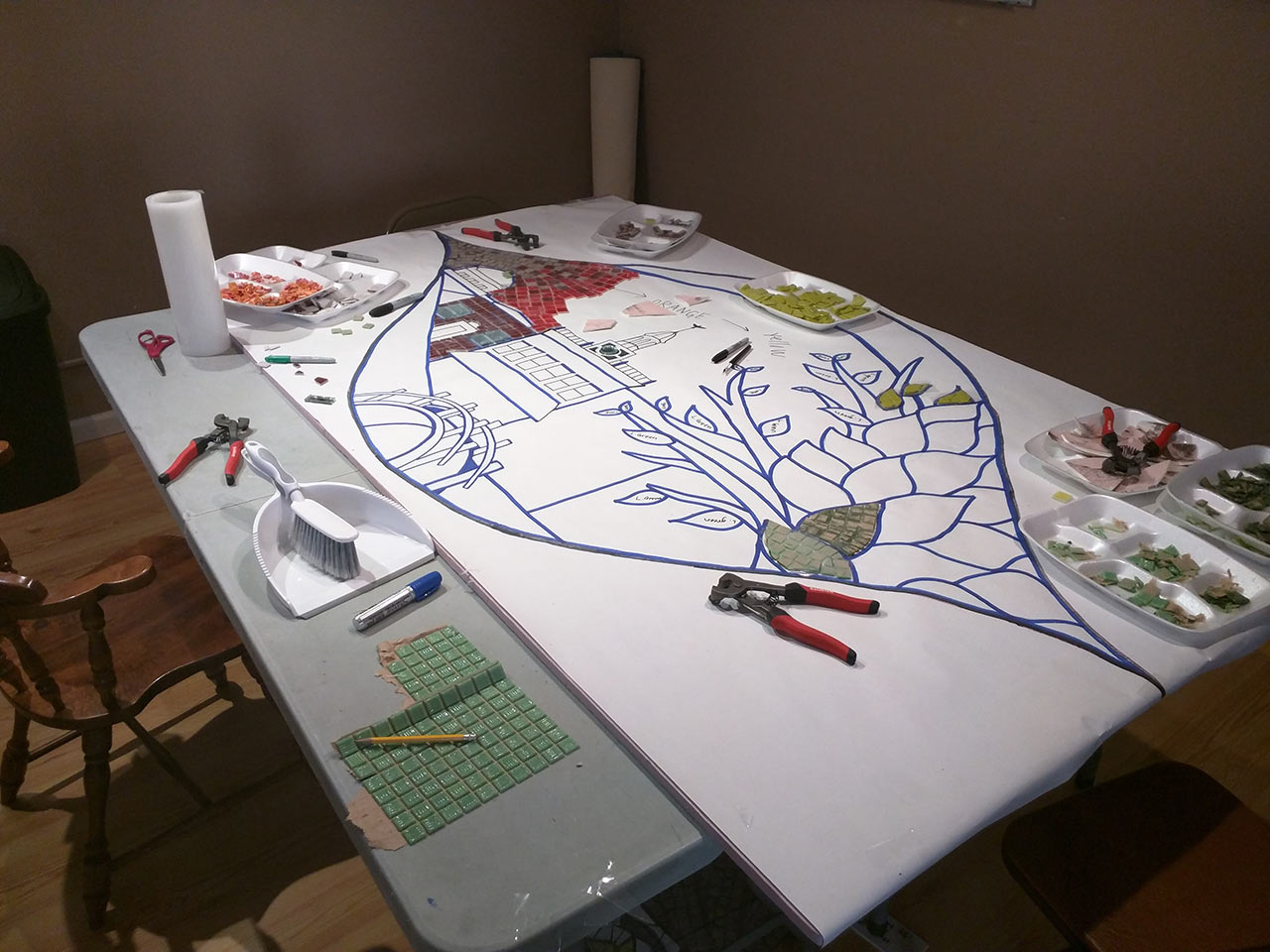 Art, to me, is an expression of and a sharing of the self, the community, and the world. It not only conveys what we see and experience, but also engages others’ thoughts and emotions in ways that nothing else in our lives can do. At FVJN, we are so excited to create a piece of art from our organization and share it with the community, and we are especially grateful for the support we’ve received from the Geneva Foundation for the Arts, which is enabling us to bring this project to fruition.

We are very excited to begin work on the mural on May 17th! The latest draft is below. On May 17th, from 10:30a-11:30a, our artist, Danielle Dobies, will be here to teach everyone how to make the mural. This will be great hands on fun and also prepare everyone to drop in and work on the mural over the summer.

To commemorate FVJN’s 10th anniversary, we are creating a tile mosaic mural to hang on the outside of the FVJN building. The mural will be designed by professional artist Danielle Dobies and assembled by members of the FVJN community.

The FVJN community will decide what the mural will look like. The artist is meeting with everyone interested in participating on Sunday morning, February 22 from 9:45 – 11:30 at the FVJN building located at 121 S. Third St., Geneva. She will explain how we will make the mural and lead a discussion of ideas for what it should look like. She will take our ideas and draw several options for us. We will pick the one we like best, or perhaps combine elements of different designs into the perfect image. Daniele will also explain the next steps we need to do, such as collecting tiles and other materials needed to make the mural.

The estimated cost of this project is $2,000-$3,000. We have a preliminary commitment for a grant that will cover half of the cost. We are seeking the rest of the funds from other grants, local businesses and individuals. The size of the mural will be adjusted to match the funds raised so FVJN will not be obligated to spend more money than we have available. Funds will not come for FVJN’s general operating budget. If you would like to donate, watch for details at fvjn.org and in future emails.

Come to the mural design meeting at FVJN on February 22 at 9:45 am. This mural will be something the Fox Valley Jewish community can be proud of for a long time to come. Your input is important. We’ll supply the bagels and coffee. It will be a fun morning. If your kids are in class at FVJS during that time, it will be easy to join the discussion. The older children will be participating as well. This a project that we all can be a part of! To find out more or let us know you are coming (we want to make sure there are enough bagels!) email Rachel@fvjn.org. RSVPs appreciated but not required.