Henrietta Szold: The Founder of Hadassah 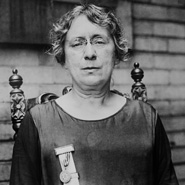 Born in 1860, Henrietta entered the world on the eve of the Civil War. Eighty-five years later, in February of 1945, in the waning days of World War II, she died.

Henrietta Szold was born a fighter. She dedicated her life to fighting ignorance, injustice, anti-Semitism, and disease. She never stopped fighting the fears and hatreds that divide people and nations. She fought with all her strength to build a better world.

Well educated, Henrietta’s confidence, ability, and drive landed her a position as the first female editor of the Jewish Publication Society—then the premiere publisher of Jewish liturgical and secular texts.

Henrietta enrolled in the Jewish Theological Seminary of America, the training ground for the conservative rabbinate. Although women rabbis are commonplace today, in the early 1900s such a thing was unheard of.  While the Seminary allowed her to take classes, it was on the condition that she promised not to pursue the rabbinate.

While living in Baltimore, she saw the suffering of Jewish immigrants who came to this country from Russia and Eastern Europe. Henrietta decided to help by organizing English language and American citizenship night classes. Her model of nighttime ESL schools continues to this day.

Fast-forward to 1909.  Henrietta and her mother took a trip to pre-state Israel, where they witnessed the starvation and disease that afflicted the people of the region.

It was a seminal moment in Henrietta’s life. Upon her return to the U.S., she soon founded Hadassah, a volunteer women’s organization with the biblical mission of Aruhat Bat Ami: the Healing of the Daughter of my People.

Her new organization’s first mission was to send two nurses to Palestine to provide pasteurized milk to infants and new mothers, and to eradicate trachoma, an easily cured eye disease, that was robbing thousands of sight.

By 1918, Hadassah had sent an entire medical unit, composed of 45 doctors, nurses, dentists and sanitary workers, to bring American-style medical care to serve all, regardless of race, creed, or ethnicity.

From these early efforts developed the beginning of the Israeli healthcare system, which today includes some of the world’s leading research and treatment hospitals, and schools of medicine and nursing.

Today at 100 years old, with 300,000 members, Hadassah is the largest Jewish organization in America, and one of the largest women’s volunteer organizations in the world.

Want to join the discussion?
Feel free to contribute!

Jewish Summer Camp in Naperville! Swedish Days 2012: We Need You!
Scroll to top